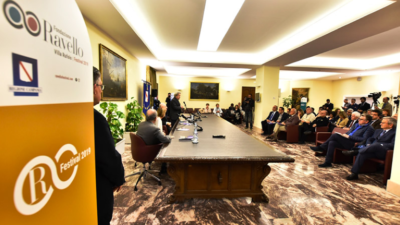 The Ravello Festival 2019, at its 67th edition, proposes a musical program divided into five sections for a period spanning several months and several seasons, from spring to autumn.

“Orchestra Italia”, a tribute to composers and orchestras of the Bel Paese, is the symphonic proposal concentrated in the months of July and August that will have as a suggestive scenario the stage overlooking the sea of ​​the Belvedere of Villa Rufolo, show in the show.

For the first time the program, curated in collaboration with the Teatro di San Carlo in Naples, the institutional partner of the Ravello Foundation, offers the opportunity to appreciate the sound and personality of prestigious Italian orchestras in a single season.

The opening (June 30), entrusted to the master Juraj Valčuha who will direct the Orchestra of the Teatro di San Carlo, pays tribute as usual to the tutelary deity of the Festival, Richard Wagner, supporting him with Giuseppe Martucci, one of the most distinguished musicians of our Country. And also in the following appointments the international repertoire joins the rediscovery of little performed scores of Italian composers and worthy of renaissance, in an itinerary that goes from the Baroque to the Twentieth century (Vivaldi, Cimarosa, Ghedini, Smareglia, Respighi, Casella, Sgambati, Rossini, Puccini, Salviucci and Rota, of which this year marks the thirtieth anniversary of his death).

“The notes of Sigilgaita” is the organ section, includes a series of concerts that will take place in the Cathedral of Ravello where the marble bust of Nicola Rufolo’s noblewoman is preserved, a copy of which, with digital animation, accompanies visitors to the Tower museum of Villa Rufolo. Starring Bernard Foccroulle (24 July), Olivier Latry (29 August), Andrea Macinanti (12 September), Michel Bouvard (20 September) and Luca Scandali (11 October).

The chamber music events enrich the billboard with a third section, “In the Garden of Wagner”, which will welcome the public in the Sala dei Cavalieri, among the flowers of the Mediterranean colors that enchanted the genius of Leipzig (they are all midnight concerts with a pianist Pierre Laurent Aimard marathon between Scala and Ravello to perform the Guadagnini Quartet, the Odhecaton Ensemble, the duo Cimmino, Ferro, the Ocarinistico Budriese Group, Simone Rubino, the Quintet of Wind and the String Quartet of the Teatro di San Carlo di Napoli with Giuseppe Albanese at the piano).

Great news, already started on April 17th, is the opportunity offered to young students of the Conservatories of Campania and other host cities to perform in Ravello, a privileged place, which thus becomes a meeting point between high academic education and professional activity. “The Best of Youth”, this is the title of the section curated by Antonio Marzullo, artistic secretary of the Teatro Verdi in Salerno, another partner of the Foundation, which will host (with the exception of the months of July and August) conservative soloists, choirs and orchestras for a classical repertoire, with jazz incursions, which will take the Festival out of the walls of Villa Rufolo disseminating the emerging talent in the squares, in the squares, in the gardens, in the auditorium and in the many splendid historic churches of Ravello.

Among the many symphonic formations there will also be an appointment with the Baroque Academy of Santa Cecilia conducted by Federico Maria Sardelli (7 July).